soup season is on!

Feeling "sweater weather" for tomorrow and pretty darn excited about it.  Nothing like a nice crisp autumn day, although the last two windy days have been fairly spectacular.  The massive weather front blew through here yesterday morning and by late afternoon the sky was the blue that named this blog.  Today the breeze kept flipping up my tennis skirt as I was running errands, but it was warm and my legs are still tan so no worries.  The temperature is falling and the remaining leaves aren't long on the trees.  I have that delightfully fuzzy feeling of too much fresh air, a nice shower and a cozy sweater.  Love it.
It is now officially soup season.  Tonight I greatly modified a simple soup recipe from Cooking Light so we all could enjoy it.  Originally this recipe called for Spanish chorizo sausage.  Being sausage, it's a pork product and one of us will not eat pork so hence the modification.  Also I stumbled upon "Babe, A Pig in the City" last night on HBO and that pig was just so adorable eating pork for me was out of the question (the first movie, "Babe" is a must see if you have small people).  I researched the spices involved in Spanish chorizo and tossed them with cubed chicken breast meat before browning the chicken as the base of the soup.  You could adapt this further and use ground pork and the seasonings, removing the meat to drain after browning and wiping the pot dry before cooking the onions and garlic.
Tonight's soup was served with rosemary bread sliced and brushed with olive oil, baked at 350 degrees for 10 minutes before topping with a little plain goat cheese and returning to the oven until the cheese was bubbly (5-10 minutes more).  I made a pretty plate of raw orange pepper slices, cut carrots and broccoli florets instead of a salad.  Dessert on the table was fresh pears, but I still have apple cake in the refrigerator which might just be my second dessert (I'll share that recipe later this week).
So, here you go.  Grab a nice soup pot and in 30 minutes or so soup is on!  My soup pot is my blue LeCreuset round french oven which technically I can not just grab.  I have to use two hands and lift with my legs (it's in a low cabinet and kind of heavy).  But, it will keep the soup warm for hours even with the burner off! 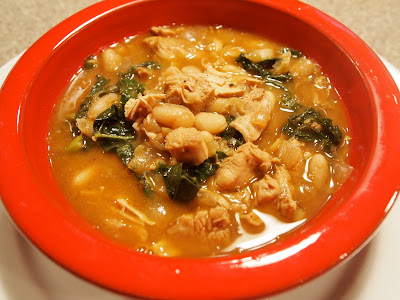 Chicken Chorizo, White Bean and Kale Soup
one pound boneless skinless chicken breasts, cut into strips or cubes
1 T olive oil
1 T paprika
1/4 tsp hot paprika (optional)
1/2 tsp ground coriander
1/4 tsp ground cloves
1/4 tsp ground black pepper
1/4 tsp dried oregano
1/4 tsp cumin
4 cloves of garlic, minced
1 tsp kosher salt
1 C chopped onion
3 C chicken broth (buy the organic broth in boxes at Costco)
2 (15-ounce) cans cannellini beans, rinsed and drained
4 C chopped kale leaves (coarse stems removed)
1 T cider vinegar
salt and pepper to taste
Toss chicken, olive oil and spices together (paprika through salt).  Heat 1 T of olive oil (or more if you need it) in a soup pot over medium heat.  Add the chicken mixture and stir to cook through (10 minutes or so).  As the chicken is cooked you can break it up with your spatula if you like smaller pieces (I have a Mario Batali silicone spatula/spoon with a nice wooden handle from Sur La Table which is super useful).  Add onion to pan and saute with the chicken another 5 minutes until translucent and fragrant.  Add broth and raise the heat to bring soup to a boil, reducing to a simmer.  Partially mash some of the cannellini beans and add all of the beans to the pot.  Stir in kale and cook for another 10 minutes.  Add vinegar, salt and pepper to taste before serving.
4 to 6 dinner servings
Email Post
Labels: beans chicken recipes soup