Here we are, back to the routine.  January.  Girls are back on campus.  Greg's either on conference calls in his basement office or on the road/in the air.  Lululemon is still selling very cute stretchy clothes and thanks to my highly entertaining co-workers I'm still part of that team.  Tennis is back in full swing (that's a bit of an unintentional pun).  And not only am I playing again, but I'm likely to be found up way too late or too early watching a good match from the Australian Open.  It's been my goal for years to be there in person in 2013 for an early 50th birthday celebration with Greg, Susan and Joe.  We'll get a little further along in 2012 and see if we need to adjust that dream.  For now, we'll leave it penciled in.

Now that the chaos has subsided, well for at least another week and a half until my Super Bowl XVI volunteer shifts at the NFL Experience fill up my calendar, there's a little time for let's just say breathing.  And sometimes thinking.  Luxuries.  The last weekend the four of us in my little family were all under one roof Greg grilled a nice big turkey breast and I fixed all the Thanksgiving/Christmas side dishes we hadn't yet had since I did not host either celebration.  Stuffing the way my Dad has always made it, but with less butter and some whole grains.  Red cabbage that goes way back on my German side, but with apples because I like it that way.  Mashed potatoes because I just plain love them.  Brussel sprouts because apparently everyone loves them and I've never fixed them.  And of course I made cranberry sauce.  If you aren't having gravy, you better have cranberries.  I do make gravy if I roast a turkey.  My girls do not eat gravy.  I never made it when they were little and now when they ask how it's made, well, saving some of the fat and using it as the base for cooking just doesn't sound like something they eat.  But Kelly and I eat cranberries.

And we all enjoyed every bite.  I can't speak for all of us, but I spent those hours in the kitchen and those minutes at the table just thankful.  With any luck, that was the last Christmas holiday Kelly will have three weeks off to just hang out at home.  I have no idea what working in the PR world will involve, but I'm guessing they do not give you three weeks off for the holidays.  And the whole goal is to have her gainfully employed even if she's across the country or the world.  So Greg and I would just listen to the sisters upstairs drying their beautiful long manes of hair, sharing a bathroom and stories and laughs.  We'd stay up way too late because college girls are used to that and they gave up time with their friends to hang out at home and watch football or a movie or that god-awful Travel Channel ghost adventures or whatever show.  Didn't matter.  Just like when they were babies and they'd fall asleep nestling in on your neck and you held them there a few extra minutes just to firmly imbed the smell and the touch and the softness of their little pink cheeks so you wouldn't need a picture, you'd have been present and aware and just taken it all in.  That connectedness.  That whole reason you were put on this planet.  You were there.  You experienced all of it.  Maybe you drifted off for a little shut-eye half way through the movie or the midnight sermon or whatever because truly there isn't always enough of you to be present every moment.  But you were there.  And it's all good.

So I can tell you that this isn't the prettiest food picture I've ever taken.  Far from it, but it's what was left when I got to the table.  If you've never bought a nice frozen turkey breast and roasted it in your grill (rinse it, remove the giblets, smooth on some olive oil and a nice rub and watch the thermometer and just keep it around 350 degrees for an hour and a half or however long you need to), you should.  Makes a great meal and maybe some lunchmeat for later in the week.  If you aren't  half German and weren't raised eating red cabbage, it is delicious.  Look up a Wolfgang Puck recipe.  He's all German and knows a bit about his cabbages.  This time I adapted a Tyler Florence recipe to save a little time.  Enjoy!

Quarter the cabbage and cut out the core.  Finely slice cabbage.  Rinse in cold water, drain and set aside (I used my salad spinner).  In a large pot, melt the butter (or butter and oil) over medium heat and saute the onion and apples for 3 minutes until they begin to soften.  Add the cabbage and broth.  Cook for 5 minutes until it begins to wilt.  Stir in the vinegar to keep the bright red color.  Add sugar, salt (start with a good 1/2 tsp and add more as needed) and pepper (again 1/2 tsp to start) and cover to cook for another 20-30 minutes until cabbage is soft, stirring occasionally. 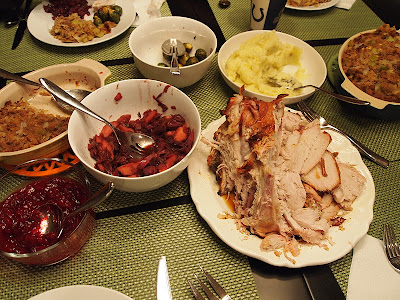