It's frigid here in lovely central Indiana, but I still bought my pansies to plant in my pots at my front door today.  One of those gardening rules:  pansies out for the basketball tournament.  That might just be an Indiana thing and I'm guessing when the Indiana people who follow this rule made it up, they were thinking of the storied single-class high school basketball tournament.  That's going on along with March Madness this weekend so I bought my pansies.  But it's too dang cold to dig in the dirt today, so they'll wait patiently by the sunny window in my garage.  They are joining my herbs and flowers I winter over out there.  When I pull in the garage after yoga, tennis or whatever the day's workout might be if I have water left in my bottle I pour it on the wintering plants.  I have already had my geraniums bloom.  It's a little experiment of mine.  The thyme, oregano, rosemary and parsley are doing great this winter.  But the people of Indiana, well, we're hoping that since it's the second day of spring at some point we can stop pulling out the down jackets and actually pull on a windbreaker.

But, it's great baking weather.  I'm not sure when it's not great baking weather at my house, but it's a good week to heat up the oven.  I posted a recipe for hot cross buns two years ago (!) and this recipe is a fun twist on it.  An equally good yeast dough (all yeast doughs that include butter, milk, eggs and sugar rock) studded with traditional currants and a little orange zest rolled up around a cinnamon, nutmeg, allspice and brown sugar filling.  Not a tricky dough and easy to mix, knead and rise without a bread machine if you have a heavy duty stand mixer (KitchenAid type).  Start to finish in less than 3 hours, I had two pretty and very tasty loaves.  I froze one to take to the hungry children at Duke over Easter weekend, so I did not put icing on them and instead did an egg wash and coarse sugar.  Makes great toast if you can resist eating the whole loaf while it's warm and just out of the oven.  The trick to rising dough in a cold kitchen is to turn your oven on for just 2-3 minutes to warm it to about 75-80 degrees (not too hot).  Keep the door closed and then put your dough in there to rise covered with plastic wrap and a tea towel.  The first rise of the dough and the second rise of the loaves each took about 30 minutes to double.   There you go, your handy kitchen tip of the day. 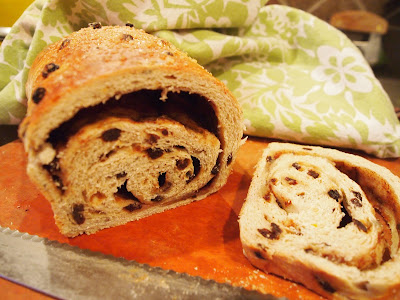 In a small saucepan, melt the butter over low heat.  Stir in the milk and granulated sugar and warm gently to 110 degrees (test with an instant read thermometer).  Watch that you do not overheat this mixture, if you do you will need to let it cool to 110 degrees or you will kill the yeast when you mix it in.  Pour the warm milk mixture into the bowl of a stand mixer and sprinkle in the yeast.  Let stand until foamy or about 10 minutes.

In a separate bowl, whisk together the flour, cinnamon, allspice, nutmeg and kosher salt.  Add to the yeast mixture along with the eggs, currants and orange zest.  Attach the dough hook to the mixer and knead the dough on a medium (or medium low) speed for about 10 minutes.  Shape into a ball, cover the bowl with plastic wrap and drape a tea towel over the wrap.  Let the dough rise in the bowl in a warm, draft-free spot until doubled (could be 30 minutes, could be an hour or so).

Meanwhile, make the filling by stirring together the softened butter, brown sugar and cinnamon in a small bowl.

Punch down risen dough.  Spray two 9 x 5 loaf pans with nonstick cooking spray.  Divide dough in half.  On a floured surface, roll one half of the dough into an 8 x 12-inch rectangle.  Smear the dough with half of the filling.  Roll up the dough, starting at the 8-inch edge, pinch the seam to seal and place seam side down in one of the prepared pans.  Repeat with remaining dough and filling.  Cover each loaf pan with plastic wrap and drape with a tea towel.  Let rise until puffy and dough is taller than the pan sides in a warm, draft-free spot (again, could be 30 minutes to more than an hour).

Preheat oven to 350 degrees with rack in the middle position.  Brush the loaves with the egg wash and sprinkle with the coarse sugar if desired.  Bake for about 35 minutes until golden and pulling away from the sides of the pans.  Turn the loaves out onto racks and cool completely.  Well, if you can't resist let it cool about 10 minutes before carefully slicing with a sharp serrated bread knife.

If desired, ice loaves with the icing ingredients blended together until smooth.