Here I type in the middle of a moody grey afternoon in paradise, after a wake-up text I didn't see coming that just knocked me a little sideways and left me tuned into Double J's commercial free Australian state radio all-day, all-Prince broadcast.  The first time Greg and I saw him live was the night after he won the Oscar for Purple Rain.  Man.  1985.  The year I graduated from Purdue.  I was supposed to be lining up interviews in downtown Hartford, Connecticut so I put on my interview suit and pumps and went straight to stand in line at Ticketmaster for two tickets that were barely in the newlywed budget.  Don't worry, I graduated with a job but first we went to a crazy good Prince concert.  Fast forward 31 years to our second Prince concert just two months ago at the Sydney Opera House.  This time I was supposed to be getting my morning rice milk flat white, which I did but shortly thereafter I found out he was playing his "Piano and a Microphone" tour that night and within minutes I was online buying two tickets that were probably still out of the budget but, you know.

Let me give you a visual.  The small stage is dark with just a few cast iron candelabras on the periphery.  A golden light shines through the stage door with a silhouetted Prince in all of his Prince glory with a cane by his side.  And that's all he had to do.  Appear.  We were spellbound for the next two hours.  He'd stop mid-song and just strut the stage with his light-up shoes like my kids loved when they were little.  He had a wicked sense of humor.  He was ridiculously prolific, so we didn't know all the songs but it mattered not at all, we were completely immersed in the magic.

This has virtually nothing to do with this recipe other than the fact that I'm so intent on enjoying the Prince thing they've got going on the radio that I might as well write.  It's autumn here in my current hemisphere and warm enough to swim, but cool enough to bake. And so yesterday morning I baked two dozen of my famous buttermilk mini donuts (one dozen chocolate-espresso with powdered sugar and one dozen vanilla with a bit of nutmeg dipped hot into melted butter and cinnamon sugar) to share with my swim friends as we sat and drank our coffee and warmed up in the bright sun. Yesterday evening I roasted cauliflower for dinner, kept on roasting and threw rhubarb/vanilla bean/orange juice/brown sugar in a pan for muesli topping and lowered the heat for today's cake recipe.  The flavors or maple and oatmeal just sounded good (because it does get chilly in Sydney, it's paradise but we have seasons).  I had buttermilk that I couldn't open properly for the donuts and felt compelled to use it up rather than repackaging it after I had to slice open the top (hate that).  I had some nice walnuts to toast and searched for some ideas online.  It was getting late, so something one bowl, no mixer and one pan baking would be just right.  It's dark now by 5:30, so my ability to stay awake (even without the jet-lag) without Greg home to nudge me, is seriously in doubt past 8:00. With this soundtrack, I'm good to go tonight.  I'll get some words down with the occasional dance break.  You can't sit when they play "Let's Go Crazy".  Well you can, but why would you.  Almost my entire life here in Australia is of the "dance like no one is watching" theme.  If they're watching, I hope they can hear the digital radio.  It would explain a lot.

So here you go, this is a hybrid of things I found online and things I bake often.  It's a good little loaf that could be toasted.  It's definitely made for coffee and or tea.  It's not too sweet.  It's not overly indulgent.  Pretty sure it will keep nicely if that's something that actually happens at your house.

Rest in peace, Prince.  Thanks for the soundtrack to my 20's that's carried on through to my 50's nicely.  Thanks for being.  Thanks for that Super Bowl halftime show.  You'll be missed.  Too bad you could never stop by for some cake.  "Oh no, let's go....." 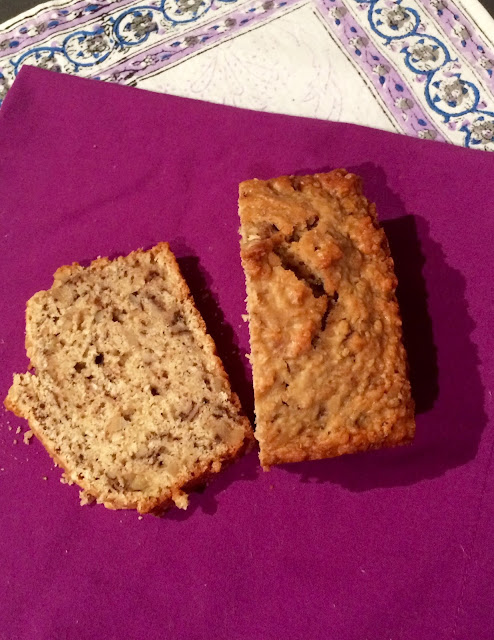 While warming up oven, lightly toast walnuts on parchment paper on a baking sheet (5-10 minutes, keep a watch on them) or lightly toast them in a dry non-stick pan over medium heat on a cooktop.  Cool slightly and quickly chop them in the food processor.

Process the oats until coarse, maybe 30 seconds.  Empty into large mixing bowl, leaving about 1/2 C in the food processor to process into a finer flour texture.  Pour into the mixing bowl and whisk together with the flour(s), soda, baking powder, and salt.

Measure maple syrup into a liquid measuring cup and add buttermilk, vanilla and eggs.  Whisk together and pour into flour mixture along with the browned or melted butter. Whisk or stir together the batter until just well-combined.  Stir in the walnuts.  Pour batter into prepared loaf pan.

Bake 45-50 min or until tester in the center comes out clean.  Remove pan from oven and cool 10 minutes on a wire rack.  Turn out onto the rack and turn again to finish cooling right side up.