So very blustery, so very dark on an early winter's night along the Tasman Sea with an East Coast Low angrily rolling through this weekend.  Finally settling in for the evening after spending much of the day securing our property because our patio furniture is menacingly moving every which way, the party lights are swinging off the tree and the wind and rain are blowing right through our big sliding glass doors.  Here's something you don't think about when you move around the planet:  you have no old towels to use as rags.  No ratty t-shirts when you get into something messy.  No old shoes to slog through a muddy trail.  Now, we've been abroad 20 months and thanks to a brutal old washing machine and countless hikes we've got some things we can sacrifice.  But not heaps.  It's too dark to worry about it.  As Greg said (from summery Shanghai), it's a good night to live in a concrete bunker on a cliff.  That is a fairly accurate assessment right now of our apartment that on summer days would be really offended by that description.  In other words, I'm hunkered down (praying for daylight, as the family saying goes) with time and inclination to finish this post I started last week.

Last week when I was winding down autumn and you were most likely welcoming summer heat.  Let me review, seasons here do not officially change with the sun and the moon, but rather with the first of a month on a quarterly basis, hence the very practical start of winter in Australia is June first  instead of the more traditional (to Americans) June twenty-first (you know, the one based on actual science of the earth's tilt and rotation).  So it's chilly and it's pumpkin season, but pureed pumpkin is not sold in cans (or tins) here so to bake anything pumpkin you first need to roast a whole pumpkin and then puree it yourself.  It's not hard, but it's certainly not as easy as opening a can or tin, as they are called here.  So far every tin I have encountered has a pull top so you wouldn't even need a can opener for your pumpkin puree if it could be bought, which it can not so never mind how easy that would be.

So I bought a pumpkin, cut it in half, scraped out the seeds, brushed it with a little bit of canola oil and roasted it face up in a medium hot oven (400 F or 200 F) for about half an hour (until tender when the flesh was poked with a fork).  After about 10 minutes, the flesh could be scooped out and then pureed with a stick blender (or stand mixer or blender or whatever you have).  Pumpkin baking crisis averted.

The whole baking with browned butter thing is still a very strong trend at my house.  The single-layer cake gets all trendy with olive oil in the batter and browned butter in the icing.  Slice by slice, it's disappearing rapidly being delicious with breakfast, tea of as a dessert.  If it's just about summer where you are, file this one away and bake it up in a few months.  Enjoy your summer and all the fresh fruit desserts.  Have something with luscious ripe peaches for me.

Preheat oven to 350 F or 180 C.  Line an 8 or 9-inch round cake pan with parchment and spray with nonstick cooking spray.  In a medium bowl whisk together the flours, baking powder, salt, cinnamon, nutmeg, cloves and cardamon (if using).  Set aside.  In a large mixing bowl, using a stand or hand mixer on medium high speed beat sugars and eggs together until pale and fluffy, about 2-3 minutes.  Beat in pumpkin puree and milk until combined.  Lower the speed of your mixer to avoid a big splashy mess, and slowly add in the olive oil.  Scrape down the sides and slowly mix in half of the flour mixture.  Scrape again and add the other half of the flour mixture until well-combined.  Pour batter into prepared cake tin (see, I've been here a while automatically typing tin instead of pan).  Bake 25-30 minutes or until a tester comes out clean from the center of the cake.  Cool in the pan on a wire rack for 10 minutes, then carefully invert the cake onto the wire rack to finish cooling.

Prepare glaze by melting butter in a small saucepan over low heat, stirring a bit and watching it carefully until it just starts to smell nutty and turn chestnut brown (this might happen in just one part of the pan, that's good enough).  Turn off heat and take pan off burner to avoid scorching the butter.  Cool slightly.  Whisk together powdered sugar, browned butter and pinch of salt (just a little one to bring it all together and cut the sweetness) adding milk a tablespoon at a time until the glaze is pourable or spreadable (however you like it).  Pour or spread over cooled cake.  Can be stored at room temperature.

Try not to eat the whole thing in one day.  I think it took us two days with some help from lovely guests and great restraint on the part of all four of us.  Sorry for the lack of photos, it's very dark in my kitchen this time of year and well, we ate the cake so quickly I only got a good photo of the very last piece. 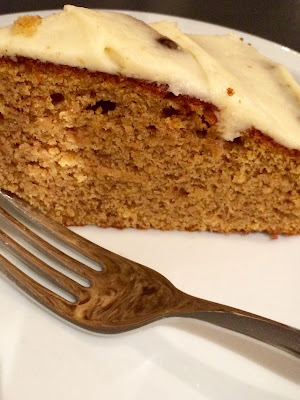