It's the end of the summer harvest season here in the Midwest which might mean you have a few extra zucchini and tomatoes.  This is an adaptation of a baked casserole from a vintage recipe card in my wedding shower era recipe card box.  Definitely have not had the recipe for all of the 28 years I've been married, but I'm guessing it's something I've made off and on for 20 years.  Let's review, I just said twenty years and it just as well could have been almost thirty years.  To be honest, it's not that hard to believe.  I (well, we) have a lot to show for 28 years of marriage, mainly two amazing daughters.  But still writing about the lapsed time between copying that recipe and making it for dinner earlier in September.....it's a long and crazy timeline.

The beginning of this month cat and I held down the fort.  I made a few things and served them to myself in various versions all week.  I had my splurge pasta with an amazing sauce from a jar that was packaged inside a box from Whole Foods and was worth all $7.99.  I made a massive fruit salad because I bought fruit at Costco and since the cat does not eat fruit, that was a lot of fruit for one person.  And I made this zucchini creole because I've always loved it and had not made it in too long.  The original recipe is a baked casserole which is great if you have an hour before you want to eat dinner, but I was just too hungry after work to wait an hour and decided a little adaptation was in order.       I'm sure there is a more sophisticated construction of this dish with a more formal preparation of the roux, but I love this classic from my collection.  Obviously, because in the course of a couple of days I ate all six servings.  No apologies! 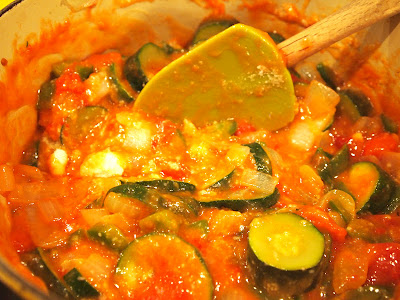 Steam zucchini in a steamer basket fitted inside a covered pot for 5-6 minutes or cook zucchini in a medium saucepan just covered with water, bring to a boil and reduce heat to simmer for 5-6 minutes.  Drain zucchini and let sit.  In a large saucepan, melt butter and sauté onion and green pepper until softened, about 5 minutes.  Stir in flour and cook over medium heat until vegetables are well-coated.  Add salt, tomatoes brown sugar, bay leaf and cloves and raise heat to medium high.  Stir mixture until slightly thickened, 5-7 minutes.  Remove bay leaf and cloves.  Add zucchini and cook an additional 10 minutes to blend flavors.  Stir in or top with Parmesan.  Makes 6 servings.