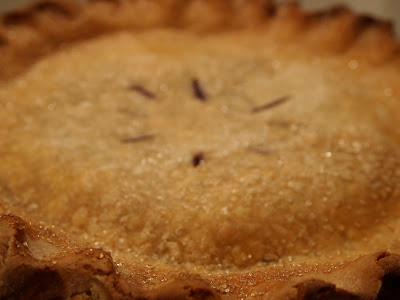 Sunday was National Pie Day and I hope you follow me here or on facebook so you did not miss it.  If you did, Greg flew out this morning and there is 3/4 of a beautiful blueberry pie on my counter for just me (little one does not eat cooked fruit in any form a genetic flaw shared by Aunt Audie).  I have a deep abiding love for fruit pies.  Peach pie is my absolute favorite; but rhubarb, strawberry-rhubarb, blueberry and apple are right up there.  Straight up double crust fruit pies with a sugared crust are preferred.  If someone bakes me a streusel-topped pie (like my wonderful mother-in-law, Becky and her fabulous rhubarb pie) that's lovely too.
When it's time to bake I check my recipe box and look for what's new on King Arthur Flour's website.  Their recipe for Blueberry Pie with a Twist hooked me with the following line "We discovered that simmering the blueberries in wine before using them enhances their flavor; they don't taste like wine, just more like themselves".  How could I not try it after that?  I'm on a be "more like yourself" path right now and have never been disappointed in anything cooked with wine.
My original intent was to follow the recipe to the letter making a whole-grain crust along with simmering the berries and wine.  As happens on occasion, I glossed over the line in the crust recipe that instructs you to chill the dough overnight.  Oops, I had planned on a one-afternoon time frame.  Their whole-grain crust recipe called for buttermilk powder and ice water.  My favorite piecrust recipe calls for cold milk and lemon juice which is basically the same thing (if you ever need buttermilk and only have regular milk, stir in a tablespoon of lemon juice and it will curdle a bit) so I got out my Cooking with Dave's Mom cookbook (David Letterman's mom is a lifelong central Indiana resident) and decided to substitute whole wheat pastry flour for half the flour in the recipe.  The crust was fine, but it's still pie with lots of sugar and some fat so really what's the big deal with whole grain crust?  It's dessert.  If I ate pie everyday, the whole grain crust would be required but then again so would an extra hour of cardio.
Choose your crust recipe and form it in to two disks and wrap the disks in plastic wrap to chill for at least half an hour.  Make your blueberry filling and then roll out your crust (warming it up on the counter for 15 minutes if you've chilled it for longer than a half hour) and fill the pie.  Here's the filling recipe that I did follow with only one modification, half the butter (I used 1 1/2 tablespoons).
Blueberry Pie with a Twist of Wine
prepared dough for a double-crust pie
6 cups  (24 ounces) frozen blueberries (fresh would work, but save your money and use frozen berries)
1/2 C fruity red wine
1/4 tsp cinnamon
1/4 tsp allspice
1 tsp vanilla
1 C confectioner's sugar
1/4 C brown sugar
1/4 tsp salt
2 T lemon juice
1 1/2 T butter
1/4 C flour
Place the berries in a large saute pan.  Add the wine.  Simmer the berries gently over medium-low heat until the liquid in the bottom of the pan is syrupy, this will take about 45 minutes.  The berries will get very juicy and you'll stir them a few times and eventually the liquid will thicken all on its own.  Remove from heat.  The berries can be refrigerated overnight if you aren't making the pie all in one day.
Heat the oven to 375 degrees.
In a medium bowl combine the blueberries (and the juice from the pan), cinnamon, allspice, vanilla, sugar, salt and lemon juice.  Mix in the butter (if the berries are still hot it will melt, if the berries have been chilled, melt the butter before combining).  Then stir in the flour.
Roll out the bottom crust and place in the pie pan.  Pour in the berry mixture.  Roll out the remaining dough for the top crust.  Place on top of filled pie.  Bring the hanging edges of the bottom crust up and over the top crust.  Crimp together.  Cut a few slashes in the top of the pie.  Brush the top crust with milk and sprinkle with coarse sugar if desired.
Bake the pie at 375 degrees for 30 minutes.  Gently place a sheet of aluminum foil on top of the pie and bake for an additional 30 to 40 minutes until the crust is golden brown and the filling is bubbling through the vents in the top crust.  Cool and cut to serve.  The filling will be nice and set if you cool the pie for at least 4 hours.  I can never wait that long so my pieces of pie aren't as pretty on the plate, but warm pie with or without creamy cold vanilla ice cream is delightful.