Yep, it's Thursday already.  Day 18 of my 30-day yoga challenge.  Another snowy day, another day the heated yoga sanctuary at TYC felt amazing.  I do not think the yoga can be blamed for my lack of posting consistency.  It's more that the Australian Open has begun and I have to remain news free until I get through each nights' matches on the DVR before I can trust myself to sit at my computer and not log-on to see who won.  I can not enjoy a match if I know the outcome.  I am apparently not that interested to see how someone wins or loses.  Unless there is some fashion disaster involved and then I have to see that on the big screen (Nadia Petrova and your ruffles and Venus Williams and your lattice work, I am talking about you).  I always play better during the tennis majors after observing how indeed if you have excellent footwork, get yourself set, strike the ball out in front and accelerate through your swing finishing with a proper follow-through the ball generally goes over the net with good (awe-inspiring, actually) pace and spin.  It's all about the consistency.  Missed it this week in my posting.  Achieved it in my yoga practice.  Occasionally found it on the court.

Time to make up for the delay in posting.  Really, you should see my "winter food" album in iPhoto.  I could write posts for days.  You've hopefully read about our annual Bellingrath Pig Roast.  Bob and Tammy, Charlene and Greg and I have been the constants in hosting our neighborhood pig roast Fathers' Day weekend the past six years.  The past two years we've added some new neighbors to share in the joy of hosting so we decided to get us all together well in advance this year under the guise of planning, but really more as a holiday party at a time we all had free;  namely the third weekend in January.  Heather has the little ones, so she offered to host dessert so the party could roll well into the evening.  Tammy offered to do appetizers and I offered to do the dinner part of our progressive dinner.  Most everyone was in attendance and we actually did discuss this year's pig roast for a few minutes.

Dinner menu for ten last Saturday night:  pear, basil and gorgonzola salad, harvest grains rolls, green beans roasted with shallots, smashed potato cakes with watercress and marascapone and roasted pork loin with port wine fig sauce.  As linked I've already posted the salad.  During prep I took some pictures so I've added them to my post from October.  The basil dressing on that salad brightens the pears and pecans and the gorgonzola pulls all the flavors together in a beautiful way.


I somehow have ordered Harvest Grains Blend from King Arthur Flour twice in the last few months, so some of it became delicious warm rolls for the dinner party.  Now I only have about 3 1/2 pounds of the grains in my pantry.  Funny. 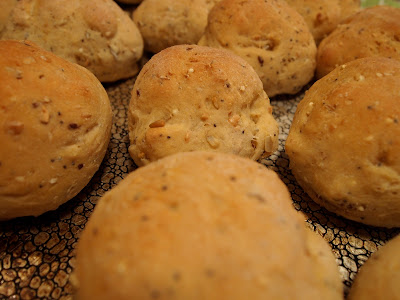 I bought the two pound bags of fresh trimmed green beans at Costco and decided the best way to fix so many beans was to put them in the hot oven while the pork loin roast rested.  Shallots are always good with green beans, so I tossed a little olive oil with the beans, shallots, kosher salt and fresh ground pepper.  Spread them all out on my stoneware baking pan and roasted them for 15 minutes at 450 degrees, stirring them a time or two while I flew around the kitchen.


The smashed potato cakes with watercress and marascapone would be better made into patties earlier in the day and browned in the oven, turning them once just before serving.  I followed the recipe and browned them on both sides in olive oil on the stove and then finished them in the oven .

Earlier in the day I made the luscious port wine fig sauce for the roast.  Reducing port wine with cinnamon sticks, honey, rosemary sprigs scents the kitchen in a very tempting way.  I left Tammy's appetizers (the crab cakes from Cooking Light were spectacular) and monitored the pork loin roasting.

In a medium-size heavy saucepan, combine the wine, stock/broth, figs, rosemary, cinnamon and honey.  Bring to a boil over medium heat and cook until reduced by half, about 30 minutes.  Discard the rosemary sprigs (some leaves may stay in the sauce which is fine, just get the woody stems out) and cinnamon sticks.  Transfer the mixture to a blender and puree until smooth. Pour back into pan over low heat and stir in the butter, salt and pepper until the butter melts.  The mixture will darken with reheating.  The sauce can be made up to one day in advance.  Heat before serving.

Preheat oven to 425 degrees.  Combine the olive oil, rosemary, salt and pepper.  Rinse and pat dry the pork loin.  Place in a heavy roasting pan.  Spread evenly with oil mixture.  Roast, turning the pork every 15 minutes to evenly brown until the center of the pork is 145 degrees (buy that $10 instant read thermometer at the checkout at Sur La Table works like a charm and comes in bright colors so you don't lose it in your gadget drawer), about 45 minutes.

Transfer roast to a cutting board and tent with foil to rest for 15 minutes.  Meanwhile, place the roasting pan over medium heat and stir in the chicken stock/broth, scraping up brown bits.  Bring juices to a simmer.

Cut the pork crosswise into 1/4-inch thick slices.  Arrange on plates or serving platter.  Spoon warmed au jus over roast.  Drizzle with warm fig sauce or serve sauce with the roast and let guests serve themselves.

Blogger's note:  Yep, today is Saturday.  An entire week after the dinner party.  Just a long post that took a while to publish.  Today was day 20 of the 30-day yoga challenge!  Sara joined me for a power vinyasa class.  Just the energy I needed to get some work done around here.  Heading out for a quick ski through the woods before it's time to cook again.
Email Post
Labels: baking entertaining green beans meat pork recipes rolls side dishes sweet potatoes vegetables